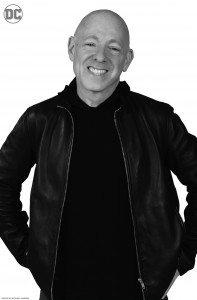 Brian Michael Bendis is an award-winning comics creator, Amazon and New York Times bestseller, and one of the most successful writers working in mainstream comics. For the last twenty years, Brian’s books have consistently sat on top of the nationwide comic and graphic novel sales charts.

The recent announcement of Brian’s multi-faceted move to DC entertainment made international headlines and trended worldwide.  Brian made his DC debut in the landmark Action Comics 1000. He currently writes Man of Steel, Superman, Action comics and is curating a custom line of DC comics for later this year.

The new deal brings the JINXWORLD line of creator-owned comics to the DC fold.  These new titles include PEARL, with Jessica Jones co-creator Michael Gaydos, COVER, with award-winning multimedia sensation David Mack, the return of SCARLET, with co-creator Alex Maleev, and the return of the United States of Murder, Inc. with Powers co-creator Mike Avon Oeming.

Brian won a Peabody Award for his work as the co-creator of JESSICA JONES on Netflix from Marvel TV.

The introduction of the multiracial SPIDER-MAN, Miles Morales, made international headlines featured on Fox News, CNN, The Daily Show, Conan O’Brien, Howard Stern and many others.  Miles is the star of SONY’s upcoming animated ‘Spider-verse’ movie. Brian is consulting.

SONY’s live-action series based on POWERS, the Eisner award-winning comic series by Brian and Mike Avon Oeming, ran for two seasons on the Playstation network with Brian as executive producer and contributing writer.

The news of a new ‘Iron Man’ character in the form of 15-year-old Riri Williams also made international headlines when the story broke in Time magazine.  Her solo debut as Invincible Iron Man debuted in the top five nationwide.

Brian’s release from Random House entitled WORDS FOR PICTURES is an intricate look at the creation of comic books and graphic novels based on the college level Graphic Novel class he teaches at Portland State University.  It shot to number one on its Amazon chart.

Over the years at Marvel entertainment, Brian completed historic runs on Spider-man (18 years), Avengers (9 years), IRON MAN, and GUARDIANS OF THE GALAXY, a 100 issue run on the X-MEN franchise, along with the wildly successful ‘event’ projects AVENGERS VERSUS X-MEN, HOUSE OF M, SECRET WAR, SECRET INVASION, AGE OF ULTRON, CIVIL WAR 2 and SIEGE.

Brian is one of the premiere architects of Marvel comic’s Ultimate line of comics.

Previously, Brian was part of the Marvel creative committee which consulted for all of the Marvel movies from the first IRON MAN all the way through to this year’s Guardians of the Galaxy volume 2.

Brian is the creator of the JINX line of crime comics. This line has spawned the graphic novels GOLDFISH, FIRE, JINX, TORSO (w/ Marc Andreyko) and TOTAL SELL OUT.

Brian received an HONORARY DOCTORATE IN THE ARTS from the Cleveland Institute of Art and a CERTIFICATE OF EXCELLENCE from the Central Intelligence Agency for his work on diversity issues.  Brian has won five EISNER awards, including ‘Best Writer of the year’ two years in a row and was honored with the prestigious INKPOT award for comic art excellence. Brian is the recipient of the Cleveland Press ‘Excellence in Journalism’ Award.

He lives in Portland, Oregon with his wife Alisa, his gorgeous daughters Olivia, Tabatha, Sabrina, his dashing son London and his dogs Lucky and Max.

Brian’s TED talk and appearance of Late Night with Seth Meyers are available for viewing at Jinxworld.com